I drove up the Coast Highway toward a short getaway in Cambria, California last year between the NCTE conference in Washington DC and Thanksgiving Break. XM Radio playing my favorite music, my thoughts ran between events of the past week and events to come.  I hoped to arrive in Cambria before dark, but I couldn’t resist stopping at the outlet mall in Camarillo.  So, a couple of hours later, and dollars lighter, I drove my shopping bags north a little later than planned. 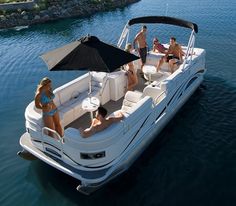 Just past Santa Barbara with the short Fall evening gaining on me, I let Google maps take me on a shortcut over CA-154 San Marcos Pass, which runs right past Lake Cachuma. Driving up the mountain pass my thoughts turned to the summer my family camped along the lake. Dad had a new fishing boat. It was decked out with a small table where we had lunch on the lake, and an umbrella that kept the summer sun from scorching our skin. Lake Cachuma is a drinking water reservoir, so no swimming. (How odd, right?) Still, trips across the sparkling blue water thrilled me. I remembered turning to watch the water wake behind the speedy boat. Suddenly, a wind whipped up up up. Then whomp, whoop, plop! Umbrella in the lake. Sink, oops. Sank, yikes. Sunk, shoot!

Smiling at the memory, I neared the lake looking for blue. Drive. Look. Look to the east. No lake. Drive further. Check for the lake. Where is it? Drive on. Finally, the entry. Proudly it announces Lake Cachuma Recreational Area. And beyond it, I see a lone camper, on a dry piece of ground. Beyond, far into the distance – was that Cachuma?

I know California is facing a record drought this year. Don’t water your lawn. Only water on odd days and never on weekends. Don’t wash your car with the hose. Shorter showers.  And still, all of that could never have prepared me for what I saw. My spirits fell with the setting sun. The lake wasn’t. Where was it? I turned in as I neared the north end of what should have been the lake. What I saw was astonishing. There truly is no water left. 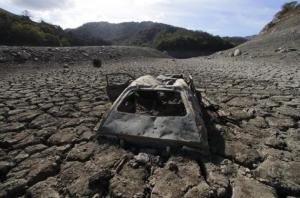 I began this post about five months ago. Since then, we have had hope for rain a couple of times, but we’ve only had a few light sprinkles. The Sierra snowpack is at record lows. We are in the fourth year of a terrible drought. Much is being said now of water rationing, limits. Some want people to quit watering their lawns. Radio shows talk about different kinds of lawns – those that support more people and activities, and those that simply exist for their green lure along medians and yards never “used”. Stop flushing for number 1. Shower every other day. Don’t launder anything you don’t have to.

Many criticize the intensive water usage by California agriculture which accounts for up to 80% of water used in California. But what to do? The great central valley grows a significant portion of the nation’s food. See this article in the Huffington Post entitled, “If You Like To Eat You Should Really Be Worried About California’s Drought”. That was over a year ago. We’re in deeper now.

On my way home tonight I listened to NPR and heard criticism of our governor for not doing enough. Word is we have enough water left for one year.

Water is the new gold rush in California.

Many social issues spring from water usage in the state. California is resilient. I wonder, how will she bounce back this time?

About Be Strong. Be Courageous. Be You

Principal at the School at the north end of Los Angeles Harbor where AWESOME happens. Working to make the world a little more wonder-full.
View all posts by Be Strong. Be Courageous. Be You →
This entry was posted in History & Social Studies, SOL2015, Uncategorized, water usage and tagged california, challenges, drought, Lake Cachuma, Social Studies, SOL2015, water, water usage. Bookmark the permalink.

4 Responses to Got Water?